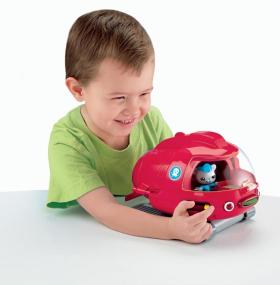 Action-packed adventures with Barnacles and Gup-X that transforms into 3 different vehicles.
View larger

When there is trouble under the sea, the Octonauts dive into action. Their mission is to EXPLORE underwater worlds, RESCUE sea creatures, and PROTECT the oceans. This fearless crew is headed up by the heroic Captain Barnacles, a polar bear extraordinaire who is always ready to inspire the crew and lead them on a new mission. An expert with maps and charts, Barnacles’ true passion is the exploration of uncharted territories. And when a tough rescue mission calls for the right Gup—it’s time for Barnacles and the crew to deploy the Gup-X. 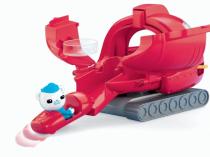 Even the most dangerous rescue mission is possible with the Octonauts’ toughest gup yet – the Gup-X. The Gup-X transforms into 3 different vehicles—the OCTO-GLIDER, the OCTO-TANK, and the OCTO-SKI. When you need to reach creatures in trouble on-the-double, the OCTO-GLIDER is your best bet. This vehicle detaches from the front of the Gup and is perfect for speeding through the air and arriving at your destination in no time at all. Small spaces can sometimes mean big trouble, so that’s when it’s time to deploy the OCTO-SKI. The perfect size for rescuing in hard-to-reach places, this mini-vehicle can be launched out of the back of the Gup-X. Just fold down the Gup’s hatch doors, load the ski into its launch bay and then press the button! Soon you will be zooming off into new adventures! The OCTO-TANK is the ideal vehicle for blasting through falling rocks or traveling over tough terrain! This rescue-ready vehicle is equipped with hatch doors that open to reveal a removable stretcher and creature transport tank.

It’s Time to Slime! Need to defend yourself against enemy attacks? Just activate the slime shooter! Load the green slime disks into the OCTO-TANK’s launcher and then pull the lever to watch them spit out of the front of the Gup! Slime sound effects and phrases from Barnacles add to the adventure.

Reaching your rescue missions with the right vehicles is only the first step! Now you’ll need the right tools to take care of sick creatures! The Gup-X comes with three creatures you can help save—a giant spider crab, a horseshoe crab and a snot sea cucumber. You can tend to the snot sea cucumber’s wounds with the cuff-style bandage or move the creatures to safety with the stretcher and transport tank. You can even slide Barnacles or the stretcher down the zip line! Just attach the pulley to the front of the vehicle and turn the crank.

More Missions & Amazing Adventures! When it’s time to embark on even more missions with the Octonauts team, Fisher-Price has everything you need—a fleet of rugged Gups built for underwater rescues, the gadgets you need to communicate with the crew, and gear and equipment designed for extraordinary explorations.